A Cultural Icon: The Importance of Radio for Hispanics

Radio is part of everyday life in Latin America, and it is part of the daily routine of Latinos in the United States. When you visit almost any public park in most metro areas in the US you will find young Hispanic men in groups listening to their radios and conversing. You will also find families barbecuing, dancing, and enjoying their day with a ubiquitous radio as the center of attention.

But this tradition of radio enjoyment is not new. In most Latin American countries and particularly in rural areas, radio is the most local of all media and has served traditionally as the town-crier in an interactive way and as symbolic precursor of what the Internet is becoming. In smaller localities the radio announcer publicizes jobs, tells of lost animals and children, helps locate lost boyfriends and girlfriends, and spreads the word about local events. The local radio station also hosts community members in the form of discussion forums. Clearly, they also devote many hours to music, humor, and news. Hispanic radio in the US has replicated many of those Latin American features and continues to be a most relevant medium of mass reach.

The traditions we brought from Latin America are still well and alive here in the United States. Figures exist regarding the popularity of radio, particularly those from the radio industry. At the Center for Hispanic Marketing Communication at Florida State University, in collaboration with DMS Insights, we have collected media exposure and media attitudes over the past four years. Here I will share some statistics regarding radio use and attitudes towards radio that US Hispanics as well as others who are online have responded to our surveys (we collected approximately 500 interviews nationally with each of the following: Hispanics who prefer English, Hispanics who prefer Spanish, Asians, African Americans, and non-Hispanic Whites for a total of approximately 2,500 completed questionnaires). The data reported in this article has only been published in the 2010 Radio Ink article mentioned above. The reader should bear in mind that the following data consists of self reports and is from people who are online. Here, attention should be paid to the relative importance of radio attitudes and exposure across cultural groups and not the absolute values in themselves.

When asked to agree or disagree on a “0” to “5” point scale with the statement “My radio (AM/FM) is always on while I drive” we find that online Hispanics who prefer to communicate in English and non-Hispanic Whites are the most likely to agree with this statement (top two box), as seen in the graph below: 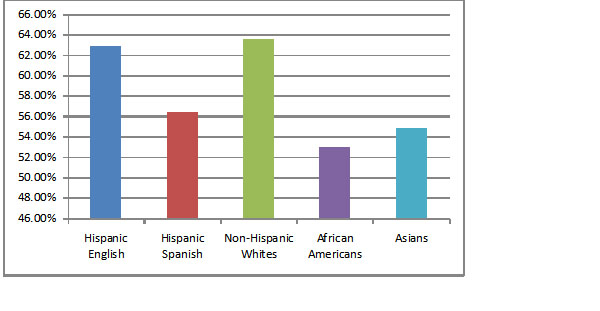 Clearly, the above findings may be explained by the driving habits of these cultural groups. When asked to agree or disagree on the same scale as above with the statement “Radio listening is an important part of my daily routine,” both Hispanics who prefer to communicate in English and in Spanish are most likely to agree (top two box) that radio is important in their lives:

In addition, when it comes to Satellite Radio access, Hispanic respondents were most likely to have satellite radio than anyone else:

These findings confirm that radio is an important medium across ethnic lines, but that Hispanics consider it most central to their lifestyle. Further, Latinos are being innovators in leading others in the online and satellite radio spheres. That is not surprising because radio is part of the culture, part of what was enjoyed in Latin America and what makes daily lives enjoyable in the US.
While the ways in which Hispanics listen to radio may change, the medium itself is powerful and important. While Hispanics are listening to both Spanish and English language radio, radio listening is still a core activity, and important complement to the daily routine. Radio stations should increasingly explore ways to offer their programming online to keep their loyal audiences over time as they evolve. Satellite radio is emerging as a competitor worth keeping track of.
Advertisers, mostly importantly, should pay attention to the relational importance that radio has for Latinos in the US. Radio advertising should not be television or print adapted to radio but should be crafted for the medium. This has been said and known for a long time but not well executed in many cases. Well executed radio advertising can be very successful because of the very nature of the medium and the closeness it claims with Latino consumers.
Posted by Felipe Korzenny